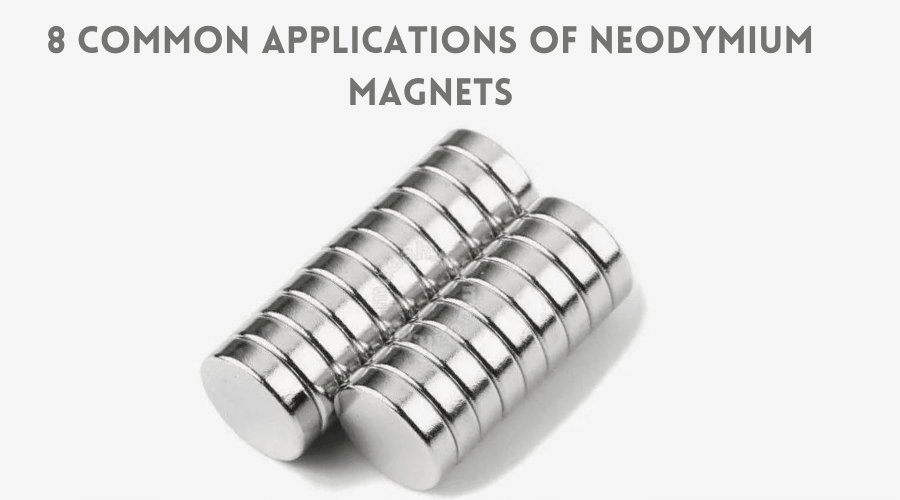 Neodymium magnets are the strongest magnets available in the world. They are much stronger than ceramic magnets, but they are also rare-earth magnets. Recently, they have been included in several products and are inexpensive. Neodymium magnets were invented in the early 1980s with the advancement of audio and electric motors. The metals of the magnet are coated with nickel or plastic to make them less brittle and prevent corrosion or rust. There are countless uses for these magnets, like they are used in hospital MRI machines, aeroplanes, boats, cars, and speaker systems. Read further to know more about their applications.

A hard disk drive has a thin film of ferromagnetic material, which gets magnetised and demagnetised after the data is recorded. Every disk is divided into tracks and sectors, which consists of tiny individual magnetic cells. The data is written into the drive when those tiny cells are magnetised by the hard drive read/write head. The hard drive heads are created in a fine wire coil with a ferrite wrapped around it. While writing in the drive, the coil is energised, the recording surface adjacent to the gap is magnetised, and a strong magnetic field forms. In the actuator, strong magnets are utilised to move the read or write head of the hard drives.

In speakers, many permanent magnets are utilised along with the current-carrying coil. The surrounding air pressure creates sound when electrical energy is converted into mechanical energy, which moves the speaker cone. For microphones, the process works in reverse. A coil of wire and the diaphragm is attached to a permanent magnet in microphones. When the sound starts moving, the diaphragm moves, and the coil moves along with it too. The permanent magnet creates a magnetic field when the coil moves, producing an electric signal that is the characteristic of the original sound.

Many tiny neodymium magnets are utilised for missing teeth. It works as an attachment in corrective devices or holds the replacement dentures together. They are so strong that even the tiniest of neodymium magnets are extremely effective. As mentioned earlier, coating this magnet for dentures increases their resistance to rust or corrosion.

Neodymium magnets make good magnetic door catches in public, residential and commercial buildings. When pot magnets or countersunk are set into the door’s surface, they attract other magnets like mounted magnets or steel disks. With the help of neodymium magnets, it holds the weight of the door, and the magnets can be separated from the door easily.

When producing jewellery and jewellery clasps, small magnets are utilised. Even a neodymium magnet of 5 mm diameter can be very effective.

The large magnetic field in the MRI scanners is aligned with the protons of the human body. Detailed internal images are produced as soon as the radio frequency waves are directed. Many hospitals with open MRI’ machines utilise large neodymium magnets that save a lot of lives.

Craft enthusiasts and model makers prefer neodymium magnets. As mentioned earlier, a tiny magnet can be so powerful that it can generate enough magnetic pull. When it comes to configuring game models, this magnet is the first choice for gaming enthusiasts. Also, craft enthusiasts create handmade stationery and cards with the help of these rare-earth magnets.

Whether you go shopping or eat out at a restaurant, neodymium magnets are present, although you don’t realise it. Several points of sale display advertising signs and stands utilise the magnets to hold them together or suspend from ceilings with the help of the hook magnets.

Here’s Why All My Shoes Are Expensive, And Yours Should Be Too

5 Guidelines To Help You Maintain Your Dirt Bike